Home General How to Recognize a Poisonous Snake
Spread the love 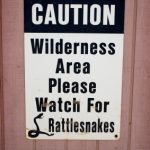 Even though it is a well known fact that most snakes that can be found slithering around the United States are actually not poisonous there is still an instinctive fear of them in many humans that can make us want to scream and run. Our fear of snakes may have to do with their creepy serpentine appearance, their lengthy history in literature as the plotting villains, or the fact that we really have no idea if that one sit there hissing could kill us with one bite or not.

This guide to how to recognize a poisonous snake should help take away some of your fear of the unknown. The more you know about snakes, the less you will fear them, and the more help you will be if you are ever faced with an actually dangerous situation.

First of all, please don’t play with snakes. Whether it’s poisonous or not, if it bites you it will hurt. Bad. And you may come down with an infection if the wound is not properly treated. Treat snakes with respect and give them a wide berth, and they should leave you alone. If you ever do come across a snake whether poisonous or not, just stand still and it will usually leave by itself.
There are 2 families of poisonous snakes native to the United States—pit vipers and coral snakes. These are mostly found in the southwestern areas of the United States but have been known to occur locally in other parts although this is rare.

Pit vipers include the copperhead, the water moccasin or cottonmouth, and the dreaded rattlesnake. All three of these are highly venomous and should be avoided at all costs. Pit vipers have wide heads that come shaped like a triangle. Non-poisonous snakes have narrower, more rounded heads, so if you see a triangle or diamond shaped head, back off. Although you may never get close enough to see this, pit vipers also have elliptical, cat-like pupils, much like 2 vertical slits right in the middle of their eyes. Snakes that are not poisonous generally have more human-like eyes with rounded pupils.
Another way to identify a pit viper is by its highly visible fangs. These are a pair of long teeth protruding from the front of the mouth and curving slightly inward. Non-venomous snakes usually have rows of smaller teeth and no prominent, protruding fangs.

The name pit viper comes from the deep pit that can be found halfway between the eye and the nostril of the snake. Although this can be a little hard to see, if there’s no pit, there’s no pit viper and the snake is probably not poisonous.

Rattlesnakes, in the pit viper family, are easily identified by their rattles, located at the tips of their tails. Some non-poisonous snakes attempt to imitate this rattling motion by shaking their tails, but only a true rattlesnake has a true rattle. Rattlesnakes also generally have some kind of distinctive pattern on their backs and come in all kinds of grays and browns.
Water moccasins or cottonmouths, also in the pit viper family, are usually found in or around water. They can be a variety of colors from black to green to anything between. Cottonmouths can also be identified by the white stripe beginning at their eye and tracing horizontally across the side of their head.

Copperheads are very similar to cottonmouths but are much more brightly colored. Besides all the shades of brown and sienna, many have been known to be colored bright orange or pinkish, some even having the same color skin as a human. Copperheads can also usually be identified by the alternating bands of a darker color and a lighter color on their body, although in some strains the bands can be more faded and less easy to distinguish.

Coral snakes are the easiest to identify among all the venomous snakes of the United States. Colored brightly red, yellow, and black, they are hard to mistake. One harmless king snake imitates this pattern with the same colors on his body but his red stripe is bordered by black stripes on either side, whereas the red stripe of a genuine coral snake is bordered by yellow stripes on both sides.