Home Hunting How to Choose a Boresighter
Spread the love 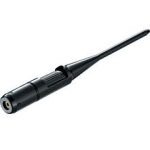 A good boresighter is worth its weight in gold. Boresighters are used to align a hunting firearm’s scope or sight to its bore. When the sight or the scope is aligned with the gun, you’re more likely to hit what you’re shooting at, which means you’re less likely to use extra ammunition when sighting your target. With the costs of today’s premium ammunition used for hunting, any opportunity to save money without compromising safety is worth considering. Another common use for a boresight is to check the zero of a gun while you’re out in the field without having to fire. The advantages of such a capability are numerous; you’re far less likely to scare off a deer or pheasant if you can check zero without disturbing the silence with a rifle shot. With these purposes and advantages in mind, this guide will give you some input on how to choose a boresighter the next time you’re in need of one.

There are two styles of boresighters. The first involves a collimator, while the second is battery operated and uses a laser. Let’s discuss each. The collimator boresighter will have the collimtaore attached to the gun muzzle via an arbor or a magnet. If attached by a magnet, the collimator may be used for any firearm, no matter the length of the barrel or the caliber. The arbor-attached collimator will require a gun with a barrel at least four inches long, and will be supplied with albors for calibers ranging from twenty two to forty five. After you attach the collimator, you will need to adjust the reticles or the sights to make them point to the center of the grid pattern, as this indicates the sights are in alignment with the bore. Once you have finished the sight-in, you should reattach the boresighter and record the relative positions of the scope or sights, which will enable checking the zero of the gun at a different time.

The advantage of a laser boresighter is that it can check for zero at any time once the gun has been zeroed without the need to fire any ammunition. Additionally, results from a laser boresighter are significantly more precise than those obtainable from collimator boresighters. You can check the zero by placing a target at a defined distance (say, one hundred yards away), and marking the laser and sight points are relative to each other. The zero can be checked later by viewing the same target at the previous distance and ensuring that the relative points of the laser and the sight are the same as they previously were.

Remember, in the end, almost any boresighter will do what you bought it for, which is to align your hunting gun’s sights or scope. If you absolutely need accurate zero checking, or are using an open sight, it may be worth it to invest in a laser boresighter. If neither of these cases apply to your circumstances, then the boresighter you get may depend solely on your personal preferences and resources. In the end, the gear doesn’t matter as much as the fun you have using it. So get out there and be safe and have fun!