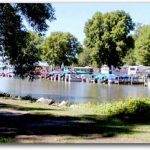 Indian Lake was once called the “Million Dollar Playground”. The old amusement park on the shore of this 5,800-acre lake is long gone. So is the dance hall and quieter days of the wooden rowboat. What’s taken the place of these by-gone glory days is one of Ohio’s most popular recreational lakes and state parks. According to statistics gathered by the Ohio Division of Parks and Recreation, the number of visitor instances to play and recreate at Indian Lake are well over a million times a year.

The highlights of Indian Lake are almost too numerous to mention. Visitors come with varied interests that include fishing, boating, camping, hiking, nature watching, swimming, snowmobiling, and enjoying the amenities of near-by restaurants, shops, and cottages. The local motto is that Indian Lake is a 4-seasons destination and it’s safe to say there’s never a time when someone isn’t at Indian Lake having fun.

Anglers explore the coves, channels, inlets, mid-lake humps, and open water for a variety of game fish. Several bass tournaments speak to the possibilities of nice-sized bucketmouths that reach 18 inches. Panfishermen target crappies, bluegills, and yellow perch. Catfish are stocked by the Ohio Division of Wildlife and caught all around the lake. The saugeyes get the thumbs up from local anglers and visiting fishermen alike. The saugeye is the hybrid cross between a striper and a white bass and thrives in the somewhat murky water. Saugeye action peaks early in the spring and again in the late fall. The ODOW has stocked millions of saugeyes into the lake and Indian now ranks as one of the best saugeye lakes in the Buckeye state.

Recreational boaters have three state-owned launches to choose from at Chippewa, Moundwood, and Lakeview Harbor. A fourth set of ramps is also available only to campers and a small ramp for fishing boats is located at Pew Island. There is unlimited horsepower allowed on the water which means skiing and tubing are top attractions. Personal watercraft splash across the lake’s surface throughout the summer months. Hunters take to the water during the waterfowl hunting season and keep the boat ramps hopping. Motor boat rentals are available at Spend-A-Day Marina in Russells Point. Indian Lake is fairly shallow and when the water is low boaters need to be careful of the submerged stumps scattered throughout the main lake. Skiing and tubing are allowed only in the designated open zone.

Swimming is a main attraction when the weather is hot at the Oldfield and Fox Island beaches. Restrooms are provided at both beaches. A campground swim beach is for the campers only.

The state park campground on the north side of the lake offers over 500 electric sites. The campground is unique in that it’s one of the only state park campgrounds that offers sites along channels where boaters can tie up next to their sites. There are also paved “boat camping” sites for RVers that want to rent a dock at their campsite for their exclusive use. The regular sites are generally shaded through most of the day. Group camp sites host various types of organizations that want to set up for the night or the week. The camp store provides staples and the naturalist runs nature programs through the summer.

Hiking trails wind through the wooded state-owned lands adjacent to the campground, behind the park office, and on Pew Island. The Pew Island trail has a short boardwalk across a marsh bordering the lake. A paved bicycle and hiking trail extends along the shoreline and next to St. Rt. 366 all the way from Oldfield Island to Paradise Island on the western and southern sides of the lake.

Nature watching is surprisingly successful. Getting off the beaten path puts you in touch with wildlife that includes white-tailed deer, beavers, white swans, kingfishers, Canada geese, ducks, and a variety of songbirds.
Winter sports include ice-fishing and snowmobiling. There is little snowmobiling on land here but the lake is wide open. Watch for varying levels of ice thickness.