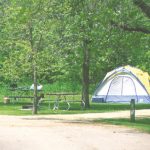 Hartford Beach State Park is located in Corona, South Dakota. The Warren River flows through the park. This river is not a typical river; the water in it is from the runoff of melting glaciers that date back to over 10,000 years ago. There is an exceptionally large area of the river that is called Big Stone Lake. Land surrounding the river and lake in the park is constructed of rocky cliffs and bluffs among tall timbers, shrubs, grass and seasonal wildflowers. Nature photographers will enjoy the hundreds of beautiful photo-ops in this park.

The area where this park lies today was once inhabited by French explorers from Canada in the late 1670s. What attracted these explorers were bears, beavers and other fur-clad animals that they could hunt and use for fur trading. Native Americans also inhabited the area and provided a lucrative and beneficial business relationship with the goods, jewelry and other resources they provided for these fur traders. The park is named after one of the most prominent fur traders during that era in this region. He and his partner dominated the fur trading business for years.

Hiking is the main attraction at this park. There are several trails that cover the area, offering beautiful views of the landscape. Robar Trail is a three-quarter-mile trail that is somewhat difficult. It connects to the Aspen Spring Trail. It is located adjacent to the Hartford Beach State Park Resort. There is a large rock atop the hill after first arriving at the trail. Next to this rock are some visible dips in the soil; there should be five of these. They are all graves of pioneers who traveled through the area in the 1800s and the rock serves as a marker for the group. At the eastern end of the Robar Trail there is a trading post. It opened in 1863 and operated for 10 years. Near this trading post is a smaller trail that leads to the foundation of Moses Mireau’s cabin site. He was Robar’s trading partner, who the trail was named after.

Village View Trail is an easier hike and is suitable for all ages. It spans one-eighth of a mile. There is an interesting attraction to see on this trail – a large mound that was once an Indian burial ground. The skeletons were excavated in 1922 by Dr. Over of the University of South Dakota Museum. In that time era, mounds were used by the tribe that inhabited the area to cover the dead in mass graves. The Village View Trail does not connect to any of the other trails in the park. Three other trails exist in the park; a complete guide can be obtained at the main office with a map. There are several other interesting things to see along these trails, including a prehistoric village’s remains.

Swimming is allowed in marked areas of the lake, but visitors are advised not to swim in any areas that are unmarked. Lakes such as the Big Stone, which are fed by streams, often have undercurrents. Admission to the park requires a permit, which may be obtained at the main office. Camping and picnics are also allowed on the park’s premises. There are several picnic sites with grills scattered throughout the state park. Visitors are not allowed to create fires anywhere outside of these grills and fire pits. The land in the park is often dry because of the high elevation and may be a potential fire hazard. The forests are protected, so visitors should also try to refrain from smoking when hiking among these beautiful trees.

Several camp sites are found throughout Hartford Beach State Park. Most campsites are primitive, but there are some that have water or electricity hookups. The park also has a camping cabin that can be reserved with an advance notice. The cabin is rarely available, so it is important to book it at least 6 months in advance if possible. Wheelchair accessible camp sites are also available for handicapped visitors. For complete information about permits, rules and making camping reservations, contact the main office at:
Hartford Beach State Park Office
13672 Hartford Beach Road
Corona, SD 57227
(605) 432-6374
http://gfp.sd.gov/state-parks/directory/hartford-beach/