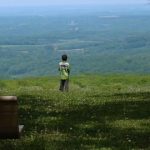 Blue Mound State Park, opened in 1959, is just north of Blue Mounds village, 25 miles west of Madison. It comprises 1,153 acres at the juncture of two geological regions: the Southwest Savanna and the Western Coulee and Ridges.

In summer, the park is a popular Wisconsin swimming destination. Cross-country skiers, snowshoers and sledders enjoy the firm, white terrain in winter. The park lures picnickers, hikers, campers and cyclists (including mountain bikers) much of the year. In every season, it’s an ideal place for an individual, family or group to retreat and rejuvenate.

The park maintains a sheltered picnic area with a playground, sandboxes and horseshoe court. It also has a vista and amphitheater, which are popular for group gatherings, reunions and weddings. Campsites are available.

White-tailed deer are common and are not bashful. They frequently are seen around the swimming pool and other public areas. In summer, visitors delight to study gangling fawns under the watchful eyes of their mothers.

The Unusual Geology of Blue Mound State Park
The park is situated on a dolomitic limestone mound. It is one of several geological mounds in the Driftless Area.

Granite forms the deep bedrock of Wisconsin mounds. Over a period of 2 billion years, nature altered the scene from mountains to sea bed to the present “mound” classification. Ancient sands and sediments became sandstone and limestone. Blue Mound and other mounds in the area have been partially preserved from centuries of erosion because they are capped by Niagara dolomite, a hard, durable mineral.

During the glacial period, the mounds of modern-day Wisconsin withstood the glaciers that encroached and flattened land as far south as Kansas. Basically, they stood preserved as “glacial islands.” Geologists now refer to the region as the Driftless Area because it contains none of the rock and soil accumulations, or “drift,” the melting glaciers left in their aftermath.

Interesting Facts About Blue Mound State Park
* It is situated at the highest elevation in the southern part of the state and is Wisconsin’s seventh-highest locale. At its summit, it is 1,716 feet above sea level.

* Millions of years ago, the area was at the bottom of what geologists have named the Silurian Sea.

* The mound encompasses different “microclimates.” As a consequence, spring blooming occurs notably earlier on trees and flowers in the southwestern part of the park.

Park staff and volunteers regularly stage naturalist presentations and other educational and recreational programs. Special events during the year include an annual campout and seasonal attractions such as the Candlelight Ski.