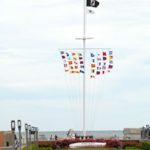 Over 6 million visitors each year come to Jones Beach State Park to enjoy the 10 mile stretch of beach. Located on a barrier Island in the town of Wantagh, New York, the park is a favorite destination for just about everyone living in the NYC metropolitan area as well as those living on Long Island. During the summer, the beach fills up with people looking for some fun and sun on the shores of the Atlanticd Ocean.

The beach itself is very well maintained as it must be when a nice day can see some 200,000 visitors or more. The Atlantic Ocean, with its not too big waves and moderate summer temperature, is a perfect place for young and old to cool off on a hot summer day. There are 6 large parking lots which can accomodate as many as 250,000 visitors. A 2 mile boardwalk runs along the main stretch of the beach and there are two very large bathhouses located at the east and west ends of the beach.

A little bit of the history of Jones Beach State Park is interesting to know. Back in 1923, Robert Moses, President of the Long Island State park Commission endeavored to create a protected beach and park area for the public to enjoy in conjunction with the ever-expanding road systems. The area he chose was a barrier island that often was completely under water. After extensive dredging, what is now Jones Beach was formed, rising 12 feet above sea level. In order to keep the sand from blowing away, a series of berms and sand dunes was established and grass was planted that served to hold the sand in place. There were no homes permitted to be built along the 10 mile stretch and unlike areas like Coney Island (NY) and Palisades Park (NJ), ordinances did not allow for commercializing the park area with carnival rides and amusements. On August 4, 1929, Jones Beach State Park was opened to the public.

The Boardwalk runs several miles and is set quite a ways back from the breaking waves of the Atlantic Ocean. People can stroll along and take in the fressh ocean air during a cool day. Quite a few concession stands line the boardwalk during the prime season. You can get some sun tan lotion or maybe a Jones Beach souvenir. There are several places to get a snack or you can stop at the Friendly’s for a hamburger or sandwich and maybe an icecream Sundae for desert.

There are plans in the works for adding to the facilities. Donald Trump is attempting to get the needed permits and approval from the local authorities to build a 70,000 square foot restaurant and catering hall called Trump on the Ocean.

There are two large public swimming pools, one at the West Bath House and one at the East Bath House. Because of budget constraints the East Bath House pool was closed for the 2009 season. Many people still use the one open pool as it is a great place to swim and have fun. Locker reentals are available and the bath house provides a good place to change in or out of your bathing suit.

While most people prefer to stay and play on the Atlantic Ocean side of the park, there is also an area where swimmers who prefer calm waters without any waves can be comfortable. Zach’s Bay, just on the opposite side of the small barrier Island provides a nice spot, especially for families with very young children.

Also overlooking Zach’s Bay is a 15,000 seat outdoor amphitheatre (Nikon at Jones Beach) which hosts famous and not so famous musicians. The unique setting, overlooking the Bay, provides for a wonderful experience on a nice Friday or Saturday evening.

Every year, Jones Beach State Park is host to the New York Air Show. This past May, the Blue Angels displayed their precision flying. Also, a contingent from the Canadian Forces (CF-18s) thrilled the crowd. The War Birds over Long Island flew their vintage WWII airplanes and many other performers added to the spectacle that drew some 380,000 spectators over the weekend.

Other things to do at the park include miniature golf, basketball, volleyball and other beach sports. A large portion of Jones Beach is left undisturbed as a nature preserve. Jones Beach State Park is one of New York States many treasures.