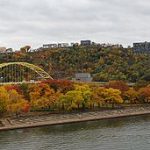 Located where the confluence of the Monongahela and Allegheny Rivers form the Ohio, Point State Park encompasses thirty-six acres directly adjacent to downtown Pittsburgh, Pennsylvania. Known as simply ‘The Point’ by locals, it serves as a venue for both the three Rivers Regatta and The Three Rivers Arts Festival, as well as a favored viewing sight for Independence Day fireworks. When not engaged by an event, the park is a favored spot for joggers and walkers from the local area, as well as providing scenic photo opportunities for out-of-town travelers and tourists alike.

The Point was originally the site of the French-controlled Fort Duquesne until 1758 when British troops, led by General John Forbes, arrived. Greatly outnumbered, the French burned the fort and fled. Fort Pitt was built on its remains and soon became the most heavily fortified British installation in the American Colonies. It was successfully defended from the siege of Native Americans in Pontiac’s Rebellion in 1763, only to be abandoned by the British Crown in 1772. Later in the 1770s, the area was claimed by both Pennsylvania and Virginia. Virginians controlled it for a brief period under the name Fort Dunmore. The first treaty between Native American and colonists was signed at Fort Pitt in 1778. The fort deteriorated and was finally abandoned in 1792 after earning the moniker “The Gateway to the West”.

Although once used heavily as an industrial center, the area had become a slum by the 1940s. Utilizing eminent domain, the first parcel of land was purchased in 1946. Point State Park was completed and subsequently dedicated in 1974, after the signature 150-foot fountain had been completed.

Getting to the Park

Point State Park borders the downtown area directly, so arriving by public transportation is the easiest and most cost-effective way to visit. Three major bike/walking trails feed into the park: The North Shore Trail, The South Side Trail, and The Eliza Furnace Trail. Each of these trails pass dozens of public parking lots. Another option is to park in the huge public lot on the South Side, near the shops, and take the subway into the city. The subway is known as ‘The T’ both in local vernacular and on signs. It costs only a few dollars, runs often during the day, and is extraordinarily clean and safe.

Once you are in downtown proper, finding the Point is simple. Walk down-hill. The entire city of Pittsburgh is on a slope. Point State Park is located at the bottom of that slope and is accessible at nearly every pedestrian crossing it touches. Purple or yellow signs are also located on the light poles throughout the city to guide you. There is no fee or gate to enter, one simple walks in.

The park is open year-round, every day, and is open from sunrise until 11 PM. Pets are welcomed, but must be contained or leashed at all times. Owners must pick up after their animals. Point State Park, including the public restroom, is also handicap-accessible. However, one must remember that the portions of the park that edge the river are cobblestones, which can make for quite a bumpy ride in a wheelchair or mobility scooter.

Unlike most larger state parks in Pennsylvania, Point State Park has special rules due to its urban setting and small size. There is no rollerskating, rollerblading, skateboarding, or bicycle riding permitted, and obviously, no horses! Friendly games of Frisbee and catch are usually permitted, but be sure you have plenty of room to yourself and keep an eye out for other park-goers. Jogging is fine, but be careful of others who may stroll into your path.

The fountain is one of Pittsburgh’s most well-known icons. It is two hundred feet in diameter. When weather permits, a 150-foot plume of water shoots forth from an aquifer 54 feet below Pittsburgh. This is sometimes referred to as our ‘fourth’ river. While sunbathing and using the water to splash oneself to cool off is permitted, wading, fishing, or fouling the water in any way, including the dipping of feet, is frowned upon heavily and not permitted.

For more information on Point State Park, write to: