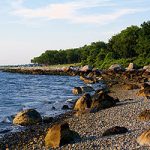 It’s really not hard at all to find a great park in Rhode Island, so to be considered the “gem” of the state’s park scene, you really have to be doing something right. Colt State Park is primarily known for its panoramic view of the Narragansett Bay, but that’s really only one small fraction of what the park truly has to offer. Beyond the view itself, you’ll find wide and varied scenery and amenities to make just about anyone happy.

Take, for instance, the bicycle trails. A problem with many parks: once you’ve been around the trail for a few minutes, you’re just making circles. Well, Colt State Park boasts a full four miles of smooth biking trails amidst beautiful, lush green scenery and salty Bay air.

The manicured lawns and groomed trees create an environment that is natural but not overwhelming. Where a lush park typically has you feeling a little closed in by the tall grass and thick trees, the groomed nature of Colt State Park leaves you feeling at one with nature without being suffocated by it.

Operating from eight in the morning until three thirty in the afternoon in the winter, and eight until four in the summer, the park is really just right for any daytime outdoor get togethers. The park is also known for a number of fun outdoor activities. Fishing in the park is great, as the weather in the area is typically very agreeable. Hikers also enjoy making use of the park for a quick afternoon backpacking trip.

The park might not be exactly what you’re looking for if you want a little more privacy, if you’re a camper or an RV traveler, but as far as daytime outdoor activities go, as far as finding a place to host an open air barbecue or other party, look no farther. With over four hundred picnic tables in six different picnic groves, with its incredible scenery, the open panoramas, the Bay view, you really can’t ask for a better place to hold a birthday party or a wedding reception outdoors.

While the park does have full bathroom amenities, it should be noted that all garbage is “carry in/carry out”, so make sure that you bring along a trash bag (or a few, depending on the size of your party) for all of your garbage, as you’ll probably just get confused trying to find a trash can in the area.

Rhode Island packs a lot of natural beauty into such a small state, and as far as the park scene goes, one visit to Colt State Park will let you know exactly why it’s called the state’s “gem”.

For hours, directions and so on, check out the park’s information resource site at http://www.riparks.com/colt.htm.