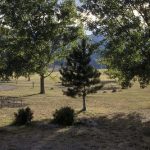 The Lewis & Clark Caverns were never seen by Meriwether Lewis and William Clark. The expedition that mapped much of the United States Northwest passed by the caverns, but on the Jefferson river, over a thousand feet below the cliff face in which the cavern was discovered. But in honor of the men that opened the area for westward expansion, the park carries their name.

Water passing through the limestone mountains collects and drips the calcite into cave formations that are spectacular. Stalagmites are formed when the calcite drips on the floor, Stalactites are made when the drips “freeze” on the ceiling. When these two meet, the cavern shows columns that rival any Greek temple. The tour of the caverns takes about two hours and the guide is knowledgeable about the geological and historical significance of the site. Do wear a sweater, however. The caverns are not only naturally occurring rock formations, they are naturally air conditioned. It is never warmer than fifty degrees inside, regardless of the outside weather.

The good news about Lewis & Clark Caverns State Park is that the visit is not over once one has seen the caverns. The park has many amenities that make it an ideal vacation destination. Perhaps the most important is sleeping accommodations.

Visitors may bring in recreational vehicles. There are electrical and water hookups as well as sanitation dump stations. Water is turned off October 1, so self contained units should bring in water and be ready to leave the site for waste removal. Campers may reserve cabins or tipis. Cabins are available all year and are equipped with electricity and heat. They sleep four comfortably on a double bed and a set of bunk beds. They come with a table and four chairs as well. Visitors are asked to bring their own bedding and hot plate for indoor cooking. Each site does have an outside grill. Tipis are available only during the summer. Designed to hearken back to native American times, they come with no amenities save an outdoor grill. Six people can sleep comfortably on the 18 foot diameter floor, as long as each brought a sleeping bag or pad. Flashlights and water containers are also recommended. Fires are restricted to the grill, so no ground fires and especially no fires inside the tipi. They are very popular so reserve them early.

Lewis & Clark Caverns State Park has over ten miles of trails available for the avid outdoors man or woman. The trails are rated from easy to strenuous. Regardless of the trail, remember Montana is rattlesnake country so beware of tall grass. The easy trails allow for leisurely strolls with beautiful views. Moderate trails are two miles long and cover varied terrain. It is recommended one wear sturdy shoes for them. One of the strenuous trails rises one thousand feet in under two miles. Since it most closely resembles the trail early discoverers of the caverns took, it is quite popular among well-trained hikers. The second strenuous trail is less steep but covers over four miles of forest country. For an all-day trip, the Grand Loop trail is over six miles of varied terrain that encompasses both strenuous trails.

Currently, mountain bikes are allowed in the park. Since the trails were designed for hikers, those riding bicycles are asked to yield to foot traffic and honor the switchbacks in the trails. Cutting across undisturbed terrain may lead the park service to revoke the privilege. Be courteous and the park will continue to permit mountain bikes for years to come.

Pets are allowed in Lewis & Clark Caverns State Park, but again the rangers request courtesy. Keep the animal on a leash when near others, and restrict them to campsites or picnic areas. Clean up after them, since domestic animal waste can damage the water or local plants or drive native animals from the park.

Lewis and Clark missed out on a spectacular view. Lewis & Clark Caverns State Park is worth a visit any time of year. Outdoor enthusiasts will enjoy the challenge of a winter with no running water while the casual vacationing family can enjoy the caverns and amenities the summer has to offer.