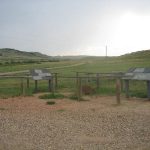 Rosebud Battlefield State Park in Montana, is not only a beautiful park, but a historic landmark that draws a significant number of visitors year after year. Families can enjoy sweeping rock-strewn ridges, rolling prairies featuring a multitude of wildflowers, and the outstanding snow capped peaks of the Bighorn Mountains. The peace and serenity one will find in the park make its stormy history all the more interesting. For here, during the last quarter of the 19th century, a battle waged between Native Americans, and United States soldiers.

A Park for the History Lover

Rosebud Battlefield State Park is unique in the sense that it is not strewn with playgrounds, cooking grills, and picnic tables. Few man-made structures exist to disturb the panoramic landscape of the park. A formal visitor’s center does not exist, however, a building which was previously a working ranch house, serves as an information center and park ranger’s quarters. Upon entering the park, individuals will see a collection of interpretive panels, which are the only markers indicating that this beautiful and scenic setting was at one time a battlefield. Much of the site looks the same as it did at the turn of the century when General George Crook’s and the Sioux and Cheyenne warriors met in the battlefield in the summer of 1876.

The park is opened throughout the year, and public access is provided from Bighorn County Route 314, as well as a private road that runs parallel with Rosebud Creek.

The park is a primitive site which contains only restrooms, and site maps, as well as numerous concrete markers in the shape of pyramids, which denote key battlefield sites. This park is the perfect site for a history buff, or those seeking solitude to contemplate the past or the future. The Northern Cheyenne from Lame Deer consider Rosebud Battlefield State Park sacred, and are frequently seen holding ceremonies in the park for the purpose of honoring long dead soldiers and warriors who died in battle on the very ground on which the park is situated.

Characteristics of the Park

The park features a well preserved homestead site which one can explore, and guided tours of the historic battlefield sites are offered at certain times of the year. A buffalo jump which dates back to 3,000 B.C. can also be viewed, and a platform is available on which to take photographs. Certain of the archeologists who explored the region have stated that it may be the oldest Buffalo jump in Native American History. In the sandstone wall located below the jump, authentic petroglyphs can be seen. One can also view tipi rings, rock cairns, and genuine eagle-catching pits–the latter, of course, are no longer in use.

The park is open for hunting season, and one can hunt deer and antelope, or opt instead, for game bird hunting. Parts of the park are leased to ranchers who use it for the purpose of grazing to cattle. An innovative method of rest-rotation grazing is utilized in order to maintain many species of native plants, as well as protect the wide variety of natural wildlife and their corresponding habitats.

When Rosebud Battlefield State Park was established in 1978, it fulfilled the dream of Elmer E. Kobold–a rancher who was committed to protecting this area of land and all it stood for.

Kobold, born and raised in Oklahoma, oversaw the care and maintenance of the historic battlefield homestead and its surrounding grasslands, hills and bluffs. Over the years, he worked to protect the historic battlefield sites and authentic Indian artifacts. For many years, United States military scholars have journeyed to Rosebud Battlefield to study strategies used by both sides.

In recent times, the dream of preserving the park had been threatened by the prospect of coal mining. This threat came about when a rich coal seam was discovered by those holding mineral rights on the land. The Montana Fish, Wildlife, and Parks Commission is making every effort to work to protect the archaeological sites and historic battlefields by combining their efforts with organizations such as the Montana Preservation Alliance, and the National Park Service.

Families who are searching for an educational outing should consider visiting Montana’s Rosebud Battlefield State Park. Anyone interested in nature, history, or learning more about the Indians who once freely roamed the area will enjoy a visit to this beautiful, and significant historical area.