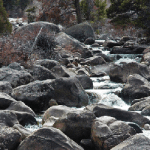 Sinks Canyon State Park is located in Lander, Wyoming in the Wind River Mountains. The sinks themselves are formed of limestone, the main point which is called the Madison Limestone Formation. The sinks are for viewing only, as the crevices are dark and narrow and so far no one has attempted to climb into them.

Sinks Canyon State Park got its name from a phenomenon called the sinks. The Popo Agie River, which was named so by the Crow Indians for its tall rye grasses, runs through the park. It’s middle fork vanishes into a large, underground limestone cavern, the sinks, and later reappears .25 miles into a pool, named the Rise. While these phenomena are not uncommon in limestone formations, the sheer size of the sinks and length of time the water takes to travel underground (approximately 2 hours) makes the Sinks especially unique. The pool is filled with trout, mainly rainbow and browns, who live out a life of leisure – no fishing is allowed here. The park has a variety of hiking trails for the adventuresome as well as facilities for picnicking, camping, and rock climbing. Fishing is also available in other areas of the park.

Sinks Canyon is surrounded by massive cliffs made of sandstone and is home to three very distinct habitats. The northern slope is covered in pine. This slope receives much shade in the water, allowing snow to accumulate. The snow provides enough moisture for pine and fir trees to grow. The southern slope is covered in juniper. This slope receives a lot of sunshine which melts the snow quickly. Animals frequent this area because food is so easy to find. Finally, a riparian ecosystem, meeting place between land and river or lake, is also rich with life. This moist area is full of aspen, chokecherry, and willow trees.

Due to its varying habitats, the canyon is teeming with birds, wildlife, and plants. Porcupines, red squirrels, deer, moose, bighorn sheep, black bears, and golden eagles can be spotted roaming the landscape. Sinks Canyon State Park is a great destination for a bird watcher. The northern slope is home to many species of birds including the Mountain Chickadee, Blue Grouse, and Western Tanager. The southern slope is full of Green-Tailed Towhees, Cliff Swallows, and kestrels. The riparian zone is full of Rufous Hummingbirds, Black-Headed Grosbeaks, and the Lazuli Bunting. Each location is full of special wild flowers and other plants which dot the landscape and serve as food sources and habitats for the birds and other animals.

Camping is offered in one of the many designated camping sites. The Popo Agie and Sinks campgrounds, located centrally within the park, are complete with water facilities, restrooms, and are wheelchair accessible. The Sawmill Campground, located in the lower east corner of the park, is equipped with the same amenities as well as a playground and group picnic shelter. Bruces Picnic Area is located at the upper northwest corner of the park and is complete with water facilities, restrooms, and the usual amenities of a picnic facility. Sinks Canyon State Park clearly has something for everyone, be it the daily traveler or the one who wants to explore deep into the wilderness and landscape.

Trails can be reached from each campsite. The Middle Forks/Falls Trailhead begins at Bruces Picnic Area Canyon Trail, a 4 mile loop. It eventually intersects with Popo Agie Nature Trail, a 1 mile loop, which is close to the Sinks and Popo Agie Campgrounds. The trailhead begins at an elevation of approximately 7,150 feet and drops to 6,750 at the Popo Agie Campgrounds. These trails will allow the traveler an unprecedented view of the river and the park’s varying habitats.

The park offers a visitor center, located at the Sinks, with exhibits on wildlife and recreation, viewing sites, and information about the park. An observation deck can be reached for those who would like an unprecedented view of the Rise. Visitors can also throw fish food from the deck to feed the trout in the Rise.